D-Day and operation OVERLORD are often regarded as one of the most important operations of all time.

The stretch of beach along the Calvados coast is world famous for the part it played in turning around World War II on the 6th of June 1944, when British, Canadian and American troops broke through Nazi defenses.

Normandy is indelibly marked by the momentous events of June 1944, and the ensuing months leading to the liberation of France and the rest of Europe.

Visitors today can explore old army bunkers and other war relics along the five beaches: Utah, Omaha, Gold, Juno and Sword. Museums and memorials throughout the region stand as forceful reminders of this decisive period during the Second World War, when Allied Forces gradually advanced from landing beaches through villages, towns and countryside to liberate the French people.

The American Visitor Centre in Colleville Sur Mer opened on the 6th of June 2007 will portrait the courage, competence and sacrifice of the Allied forces via films, photos and interactive displays.

The Memorial de Caen, inaugurated in 1988 is “the only museum to give an overall view of history from 1918 to the present day.”

The Memorial offers a brand new audio and visual guide system, allowing visitors to have a truly interactive experience while exploring the museum. Moreover, visitors who are looking for something more can take a micro light plane ride over the D-Day beaches, experiencing for themselves what it may have felt like to fly along the Calvados coast on that historic day. 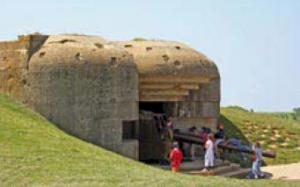 After D-Day, remains of the German defenses in Normandy

It is impossible not to feel a great sense of awe when glimpsing the remnants of the artificial Mulberry harbor on the beach at Arromanches at low tide, or the Unknown Parachutist at Sainte Mère l’Eglise or marveling at the sheer scale of the Pointe du Hoc, the German strong point claimed by the Rangers on the morning of the 6th June 1944.

Nearly 30 cemeteries (including American, British, Canadian, French, German and Polish) hold the remains of almost 100,000 young soldiers who never returned from their service in Normandy – today offering quiet, ordered space for personal reflection by every visitor, young or old, whatever their nationality. 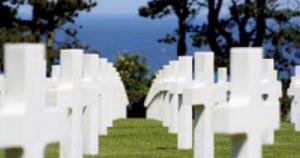