Disneyland Paris, where the kid’s eyes light up with enjoyment … and the parent’s eyes do too!

Mickey and Minnie invite you into their land of fairytales brimming with musical street parades,
colorful attractions and amusing rides along with all those adorable real-life Disney characters…
come and give them a hug. 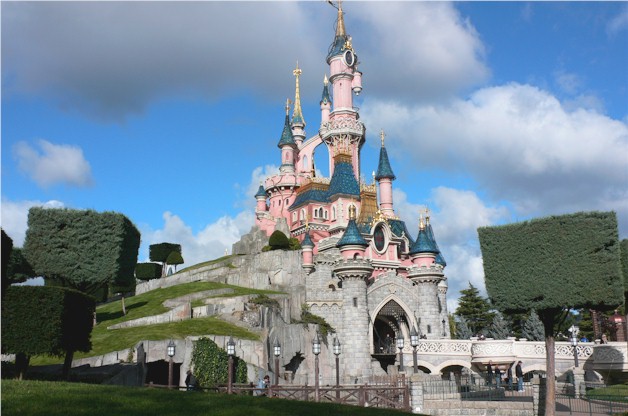 The park is easily reached by car. When coming near Paris, large billboards with Mickey Mouse on them will point the way. The park also has its own train station where the TGV (named Thalys when coming from Brussels) stops and its own RER (commuter train) station, so when visiting Paris you can hop on the RER A and stop right in the park.

Be aware though that the park lies outside of the central Paris metrozones and that you need to buy a (slightly) more expensive ticket to avoid a fine (and to be able to go through the exit turnstiles at the station).

With just a few clicks of a mouse, visitors can save precious time and buy a dated or undated theme park entry passport on a secure booking engine. Three different types of ticket are available:

Tickets for special events, such as “Halloween Parties, Christmas…” in Disneyland Park are also available to purchase on-line.

The disneylandparis.com web site is directly interfaced with the Central Reservation System, meaning that theme park ticket availability and quotes are available in real-time

. After receiving a confirmation by mail, guests will receive the passport within an 8 – 10 day period of them being purchased.

The Disney website is available in the six main European languages, and is the official web site for Disneyland Paris: the number 1 tourist destination in Europe.

The Resort incorporates two theme parks, seven themed hotels and a range of dining and entertainment options. A visit to Disneyland Park offers guests the chance to discover the magic of Disney fantasy and stories in 3-D and meet their favourite Disney characters.

The theme park, Walt Disney Studios Park, offers an interactive, behind-the-scenes discovery of the very best in cinema, animation and television. Seven themed hotels with a total capacity of 5,800 rooms enable guests to stay in the heart of the magic.

There are hotels close to the resort, including the 152-room Elysée Val d’Europe as well as three other hotels with 1,500 rooms to the resort room capacity. Numerous hotels in the Ile de France region, just a few kilometres from the resort, cater for all tastes and budgets, and offer guests the chance to discover the theme parks as well as the neighbouring region.