The National Flag of France 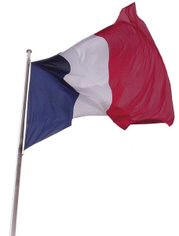 Currently the flag is 50% longer than its height (i.e. in the proportion 2:3) and, except in the navy, has stripes of equal width.

For many years the three stripes of the flag were not equally wide, being in the proportions 30 (blue), 33 (white) and 37 (red), the same proportions as the former flag of Paris. French naval ensign below.

The theory was that if they were equal then the white stripe, being brighter, would appear disproportionately wider to the human eye.

This was changed to equal width by Napoleon, although by a regulation dated 17 May 1853, the navy went back to using the 30:33:37 proportions, which they continue to use.

Léon Cogniet, Scenes of July 1830, a painting alluding to the July revolution of 1830. The flag of the Ancien Régime (white background with fleur de lis), teared and soiled with blood, turns into the tricolour flag of the Constitutional Monarchy.

During the Ancien Régime, the flag of Saint-Denis was used — red, with 2, 3 or 5 spikes.

Originally, is was the personal flag of Charlemagne, given to him by the Pope. Over the time, it became the royal banner under the Carolingians and the Capetians. It was stored in Saint-Denis abbey, where it was taken when war broke out.

In the French military, every regiment had its own flag. The accidental attack of French regiment between each other at the Battle of Fleurus in 1690 let to the habit of attaching a white scarf to the flags of the regiments — white being the colour of the kings of France.

The origins of the tricolore are said to be a rosette, created in July 1789 during the French Revolution, which (according to legend among vexillologists) used a combination of the colours of the coat of arms of Paris (red and blue), symbolically separated by the royal colour (white), with the combination often being credited to the Marquis de Lafayette.

There are many theories and suppositions about the choice of colours and indeed Lafayette’s involvement in the process. One theory says that Lafayette was inspired by the colours used by the American revolutionaries; another that the French design and scheme originated with the Dutch flag – the first European tricolour.

The three colours in vertical stripes were first used as a canton on Naval flags in 1790, and extended to the whole field in 1794. The French National Convention adopted the modern blue-white-red flag as the national flag on February 15, 1794 (27 pluviôse an. II in the revolutionary calendar). The relevant part of the decree says, in translation:

The national flag shall be formed of the three national colours, set in three equal bands, vertically arranged so that the blue is nearest to the staff, the white in the middle, and the red flying.

It came into use on May 20, 1794, in order to avoid confusion in naval warfare. Its adoption was not universally welcomed; the navy threatened to mutiny, since they were at the time continuing to fight under the white flag of the monarchy. 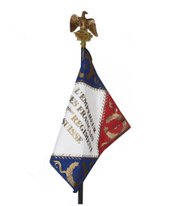 Flag of a regiment of the Napoleonic era (3rd Swiss regiment), with the blue and red parts in the corner, and the white part as a losange bearing inscriptions

Even when the three colours had been used – for example by the army in 1791 and by the National  Guard after 1789 – they were often used creatively.

For example, at the Battle of Arcole Napoleon brandished a white standard, with a golden fasces lictoriae in the centre (a symbol of the former Roman Republic), and four red and blue lozenges at the corners.

The vertical striped flag was adopted by the army in 1812, replacing the previous flags which were often a white cross on red and blue.

After the restoration of the Bourbon monarchy following the defeat of Napoleon in 1815 the tricolore was replaced by the royal white standard with fleur-de-lis which had been in use before the Revolution. However, the revolution of 1830 saw Louis-Philippe, the Citizen-King, ascend to the throne who again designated the tricolore as the national flag, which it has remained ever since.

During the Revolution of 1848, the red flag was raised by radicals supporting a socialist alternative government to the new French Second Republic while moderates rallied to the tricolore.

In World War II, Vichy France continued to use the traditional French standard. To distinguish themselves, Free French Forces under Charles De Gaulle bore a Tricolore with a red Cross of Lorraine superimposed in the centre.

For the 1998 FIFA World Cup in France, Adidas designed the official match ball with a triode blue, white and red design and called it the “Tricolore”.

The flag of France represented a new revolutionary movement; as such, it influenced many other flags, including those of Belgium, Chad, Ireland, Italy, Mexico, Norway and Romania. The flag of the Acadians is based on the French flag.

Here you’ll find pictures of Flags of France that you can use.

To return to this page, simply click on the return button on your browser.

Click here to visit the France flag gallery where you can right click on the flags and save them to your computer.