France rail hub of European Trains is your natural starting point for your rail adventure. Because of France’s central position and having common borders with the largest and most populous European nations, all European trains transit via France. 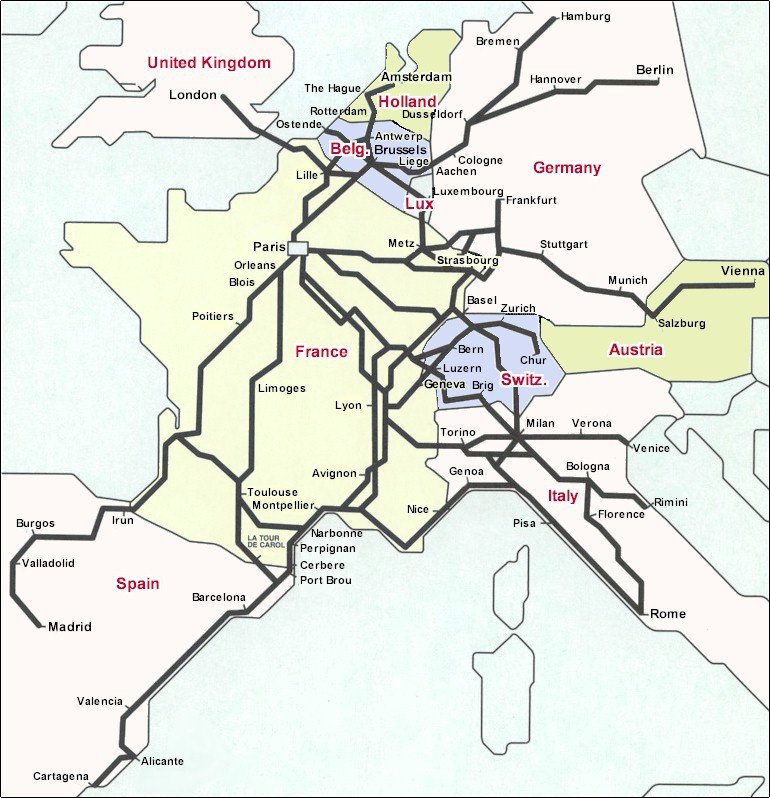 France has reciprocal rail agreements with each of its bordering countries

But, beyond that, each of them has created a jointly run distinctive rail carrier to designate this proximity and passenger rail cooperation.

These Carrier names might not be familiar, so here they are with links to more information.

France <> UK. The two main terminus stops are Paris, Gare du Nord and London St Pancras but, on selected trips, you can also board and alight at Lille or Calais, Ashford and Ebbsfleet International (Dartford). There are also special, sometimes seasonal Eurostars that will take directly to Disneyland Paris, Lyon and skiing from Moûtiers, Aime-la-Plagne and Bourg-St-Maurice.

There is an arm of the Eurostar that runs between London and Brussels … but that’s another story.

An Eastern branch of the Thalys head over to Cologne, where you can easily access the Koln/Bonn airport then on to Dusseldorf (with a stop directly at the airport) and finally on to it terminus at Dortmund. All told, Thalys transports you between four countries.

Daily departures link Paris-Est with Frankfurt, Mannheim, Kaiserslautern and Saarbrücken and other cities in Germany.

France <> Switzerland. The first high-speed inter-European train line TGV Lyria was inaugurated between Paris and Lausanne (3h34) in 1984. Since that initial success other speedy journeys have been added: Paris<>Geneva 2h58 (with up to 40 trips per day); Paris<>Zürich 4h03 and Geneva<>Marseille 3h32.

The TGV Lyria des Neiges – the Snow Train service, extends the Paris-Lausanne line to Brig for wonderful access to ski and winter resorts in Switzerland’s Valais and Leman regions during the winter months.

Inviting city breaks on this line include Dijon (mustard capital of the world), Mulhouse, Basel, Bern and Interlaken

France <> Italy. Travel downtown to downtown—Paris to Milan in 7h02m, Paris to Turin in 5h39m, Lyon to Milan in 5h02m, and Chambéry to Turin in just 2h33m. Aboard the staff speaks French and Italian, and you’ll always find English as well as a variety of amenities and services.

There’s a France-Italie TGV train trip  numerous times per day between Paris, France and Turin and Milan in Italy. Take a weekend break at the last moment—all you need is a reservation one hour before catching your train. Whatever your event or destination—Turin’s fabulous museums, the snow-covered slopes of the Italian Alps or the latest Fashion Week in Milan—France-Italy high-speed trains will have you there safely and comfortably in no time.

France <> Spain. Paris to Barcelona (6h25) to Madrid  (9h14). Time well spent when you can relax, work or play with the kids from the moment you step aboard. This service is offered in conjunction with RENFE the Spanish National Railways. On the French side this connection serves Lyon, Nimes, Montpellier and major cities along the coast to Perpignan with a connection from NorthWest originating in Toulouse and serving Carcassone.

You can also start in Marseille, Aix and Avignon. On the Spanish side you can alight at Firgueres, Girona and other major centers on the way to Madrid.

Comfort-wise the France-Spain TGV is very comfortable with plenty of leg-room and space for kids and babies. You can even take you bike aboard. Sockets to recharge electronic equipment are available in both 1st and 2nd classes. A buffet car is open for your refreshment needs.